Christmas is approaching, and Franck Muller presents timeless charm with some exclusive watches, including The Vanguard Crazy Hours series representing the brand’s innovative spirit and technological accomplishment, Double Mystery elegantly interpreting lady styles. The diamonds, gems and special time displays highlight the brand’s “pampering” for female watch lovers. The holiday season is, of course, a good time for lovers to express their true love. For gentlemen who are passionate about machinery, Vanguard Gravity Tourbillon is the best choice; and the Vanguard Crazy Hours Ladyâ€™s watch with diamonds in the same color is amazing-special hour jump display function meets the dual needs of female watch enthusiasts for external design and internal technical functions.

For ladies: Vanguard Crazy Hours Lady watches are set with sparkling diamonds. The non-sequential display of digital time scales breaks the tradition and brings a unique and fun way to read the time. The hour hand will jump to the next correct digital time scale every 60 minutes, showing fashion in a casual way. The genuine alligator leather strap sets off the charming elegance. 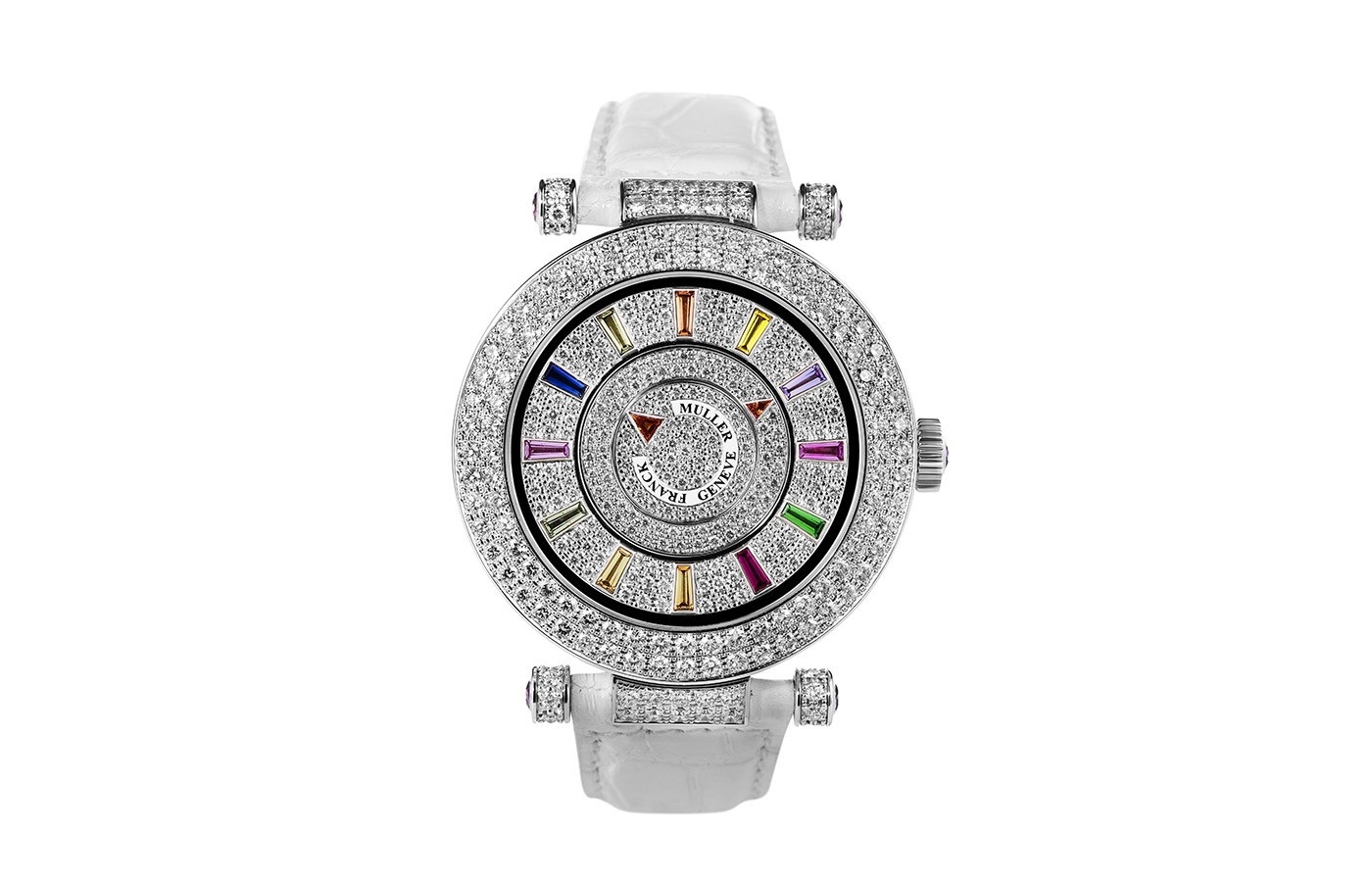 The classic Double Mystery is created with the exquisite craftsmanship of Franck Muller. The exquisite design highlights the elegance and charm of women. Equipped with the hour and minute turntables with different speeds, inlaid with fine diamonds on the inside and outside, to get rid of pointers or digital scales, subvert the tradition, and define a new way of reading with gemstone time scales. For gentleman: Vanguard Crazy Hours timepieces are bold and avant-garde in design, demonstrating the brandâ€™s strength and unique aesthetics, suitable for fashion people who are not afraid of adventure. The dial is paired with embossed figures, the winding crown controls the hour-jump module and the automatic movement. The moving curve adds a different dynamic to Vanguard’s classic design. For couples: The Vanguard Gravity Tourbillon watches are an ideal combination of advanced technology and sporty style. It is the perfect gift for lovers who seek precise timing tools. The perfect line blends the extraordinary power of the mechanical device. This watch has an outstanding design and presents a unique tourbillon frame concept with an innovative oval dial and aluminum structure. The 16 pieces of brilliant-cut diamonds decorated on 18k white gold buckle of the handmade alligator strap add refinement and value to the watch.

Franck Muller Crazy Hour with the arrangement of Arabic numerals has caused countless attention and speculation since its launch. This watch subverts the concept of inherent time.

Franck Muller is definitely a contemporary watchmaker. He has been studying watchmaking since he was a child. After graduating from the Geneva Watch School, FP Journe, Kari Voutilainen and he are repairing antique clocks. As early as the 1980s, he already started to make his own watch and named it “Franck GenÃ¨ve”. In 1991, Franck Muller teamed up with the case manufacturer Vartan Sirmakes to establish the Franck Muller watch factory in Geneva and officially launched the watch brand–Franck Muller.

Before he founded Franck Muller, he has produced two very powerful pieces. One was the most complicated watch in the world at the time, and the other was the Rolex Perpetual Calendar.

The movement is wrapped in a Breguet-style case made of 950 platinum, and Franck Muller also tailored the platinum dial made by Grandjean. Franck Muller added 160 parts to the original movement, bringing the total number of parts to 651. This one-of-a-kind watch masterpiece has written an important page in the history of the watch industry. No one in the world ever made such a complicated watch. Three years later, in 1992, this successfully modified watch was unveiled at the Basel exhibition in Switzerland, becoming the most complicated watch of the exhibition.

Louis Elysee Pigue, the most complicated watch that was converted to the show, was a self-sounding three-question movement.

Transformed into a Rolex Ref.16238 with perpetual calendar function

From the above watches, the genius Franck Muller is innovative in creating an absolutely outstanding watch and is also good at modifying the unique functions on the basic movement.

Crazy Hours watch, launched in 2003, is arguably the culmination of his superb watchmaking craftsmanship and infinite creativity.

As the formal establishment of the Franck Muller watch factory in Genthod, a small town near Geneva, in 1991, to more than 20 years later, it has become one of the most resounding names in the history of timepieces. From perfect breakthrough of appearance to theÂ bold and innovative revolution of complex functions. The outstanding signature watch series has made the Franck Muller watch kingdom and won the brand the reputation of “master of complex functions”.

There are many more success stories to be found. Today we want to feel theÂ brandâ€™s heritage and innovation. The development of the crazy hour watch series by Franck Muller.

Franck Muller Crazy Hours, which has been the subject of endless speculation since its launch because of the confusing arrangement of Arabic numerals on the dial. In 2019, the brand launched Crazy Hours Remember wristwatch, which once let the public see the innovation and strength of Franck Muller. It’s also given Crazy Hours a new lease of life.

In 2018, Crazy Hours, still looks young and fashionable today, has been available for 15 years! To that end, Franck Muller recently held a grand dinner in Singapore. Franck Muller, the watchmaker who founded the eponymous label in 1992 and launched Crazy Hours in 2003.

This does not follow the common sense of the timing, the corresponding activities, nature is also creative. The spacious set transforms into a colorful and fantastic world, where guests can explore five Spaces with Franck Muller Crazy Hours photos in the background and leave amazing images behind.

When I first saw this watch, it was on the Basel watch show in 2003. If I didn’t witness the real thing with my own eyes, I thought Franck Muller was joking with many watch fans! Because Crazy Hours, the way it’s arranged numerically on the dial, completely destroys the inherent law of the dial!

Time definitely lives up to its name. On the barreled dial, there are still 12 Art Deco Arabic numerals neatly arranged, but the order of the numerals is not from 1 to 12 clockwise. In fact, there is an originality of Franck Muller watchmaker behind. According to the watchmaker Mr. Franck Muller, time is a serious subject, which has an unchangeable and unshakable law. On the other hand, he thinks theÂ time has an interesting side, so he designed the Crazy Hours watch without violating the law of theÂ time.

If you want to know more about this watch, you can find the answer in the next issue of the blog. Of course, smart friends can leave a comment below, we can discuss together.

In fact, as a brand, it will regularly launch its own limited edition or commemorative products. For one thing, it is order to have a higher visibility for the brand occupying the market. On the other hand, it also reviews and recognizes the development concept of brand.

In 10th anniversary celebration of Crazy Hours series (Born in 2003, its birth also means that the brand declares war on traditional methods challenging the perception of tradition with superb technology and playful attitude towards life), Frank Muller also launched a limited edition watch–only 74 pieces, which is the love of collectors.

The Frank Muller Crazy Hours does not take the usual path making many people fascinated. This watch is a “crazy hour” with markets arranged insanity and hands jumping forward. Franck Muller also has a “complete madness” that includes date disorderly.

In fact, the “disorder” is inaccurate because it contains certain rules: the designer simply expands the original “one grid” (an hour’s scale) by five times through a set of shifting gears. It means that the hand moves five grids per hour, and so on. As the time moves from 1 o’clock to 12 o’clock, the hour hand had rotated nearly 5 turns around the dial. Except the crazy hours, the grain of the dial seems unique and it is easily to enhance the level of the watch.

This watch has black leather strap, which is more comfortable and fashion. At the same it is easy to maintain.

In addition to the visit of Mr. Franck Muller to the party, there are also many celebrities attending the event.

The dinner was kicked off by the song of the singer Genevieve Marentette, who was born in the music family and led the guests into the madness of Famulan. Twelve models showcased a variety of branded classics, and the commemorative limited edition watch launched by Crazy Hours on the 10th anniversary is the most popular.

New York Broadway-style dance performance: 12 professional dancers from all over the world, such as the jumping time pointer on the Crazy Hours watch. They gracefully walk around 12 numbers, just like flying on the dial. All show the superb watchmaking craftsmanship and unique creativity of Franck Muller.

Sum up:
The crazy timing method seems to enjoy the life while letting people forget the existence of time, but it hides the rare traditional watchmaking craftsmanship of the brand. And it is a subversion of traditional design.
With sparkling diamonds on the 10th hour mark and 10 logo on the center of the dial, the watch is presented in CintrÃ©e Curvex 18K gold, which is especially valuable for the 10th Anniversary Edition.

As the most legendary and sophisticated watch of Franck Muller, Crazy Hours series recently celebrated its 15-year-old birthday. For this reason, the brand held a special birthday party in Singapore, during the month of March, to celebrate the happy hour on the theme of “Confused Disorderly “. It was reported that the birthday party was very grand and the Mr. Franck Muller attended the party to express his appreciation for the event.

Although Crazy Hours series has launched dozens of styles since its birth, the 15th anniversary Asian special edition watch that is launched in this year still gives people a bright feeling with more rich in color, and looks more energetic.

The dial breaks through the traditional way to display time. And the expressing time as an abstract concept â€“ the value of time varies from person to person. The Arabic number markers of this watch are not displayed in order. Therefore, every 60 minutes, the hour hand will quickly move to the other side of the dial and jump to the next correct number. And at the same time, the minute hand will rotate along the traditional 60-minute outer ring of the dial. This design seems quite funny.

Recommended watch style
The models of men: 39.6mm*55.4mm 8880 or 36mm*50.4mm 7880.
Black or blue dial that is decorated sunbursts adding a rich palette of colour to the watch. The five-point marker on the inner flange is painted green, blue or black and the watch is fitted with the corresponding crocodile leather strap.

The models of female: 5850 with 32.1mm*45.1mm.
And the size is relatively compact. There are two kinds of styles: Chinese red and feminine pink. Pure white radiant dial with the Arabic numerals on the dial are also painted to the corresponding color of the watch, and at the same time, crocodile leather strap also has the same color.

In addition to the variety of color and models, there are still many options for the material of the case. Available style in stainless steel, stainless steel with diamond-studded, red gold or red gold with diamond-studded. When plus a variety of color straps, arrange and combine, the style that you can choose from more than 40 kinds. And the case of various materials is available in three sizes (39.60mm x 55.40mm, 36.00mm x 50.40mm and 32.10mm x 45.10mm). The styles of men or women are also available in each from. I believe that you will find the one you love most.

This vibrant watch should be very flattering. I believe that this beautiful color combining with the fun design will definitely give people a different enjoyment.